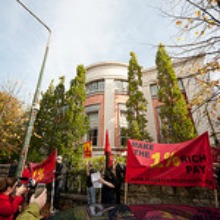 “Inequality does not affect only the poor, but can be detrimental to growth, stability and well-being in general.”

This report will illustrate Irelands’ current situation as regards Income Inequality. It will focus on the most recent data released from the Survey on Income and Living Conditions (SILC) and will look at the Gini Coefficient, the at-risk-of-poverty Indicator, the Income Quintile Share Ratio and Interdecile Ratios similar to the last report. It will also include a new indicator of income equality called the Palma Ratio which may be more accurate than the Gini Coefficient in highlighting where the inequality lies in an economy.

Table 1 illustrates that in 2012 Ireland had a Gini of 31.2%, compared to an EU average of 30.6%, and is ranked 21st out of 31 EU member countries in terms of income equality (Norway, which is ranked 1st is the most equal, while Latvia is the most unequal and is ranked 31st). The Gini Coefficient is statistically unchanged from 2011 when it was measured at 31.1%; however it is also worth noting that during this period the EU average Gini Coefficient fell so that Ireland’s position relative to the EU average deteriorated.

Table 1: 2012 Gini Coefficients for Ireland and the other EU member countries and their respective rankings

While the Gini Coefficient is the most commonly used measure of income inequality, it is silent on where in the income distribution inequality is taking place. Several ancillary measures have been developed that focus on measuring certain types of inequality.

It can be seen in Table 3 that while Ireland scores worse than the OECD average in all three categories, income disparities between those in the middle of the distribution and those at the bottom are particularly unequal relative to the OECD average.

Table 3: Interdecile Ratios for Ireland and other OECD countries, 2011

Note: Calculations for average decile figures are authors’ own.

The Chilean economist Gabriel Palma observed that the income share of those in deciles 5 to 9 is usually stable, around 50% – across countries and across time. The remaining 50% is shared amongst the very top earners in decile 10 and those in deciles 1 to 4, but its distribution varies widely between countries and across time. This observation led to the development of the Palma Ratio by two economists, Alex Cobham and Andy Sumner, who state that it gives a more accurate picture of income inequality than the Gini Coefficient because the Gini is not sensitive to data in the tails, where the inequality actually lies. The Palma Ratio, which compares the share of income of the richest 10% in a society to that of the poorest 40%, focuses on the locus of inequality, and is also sensitive to extreme inequality unlike the Gini.

Using the data supplied in the recent EU SILC publication it was possible to compute the Palma ratio for Ireland. The income share of the top 10% of earners is 24%, compared to an income share of 20.8% for the bottom 40% of income earners, which gives a Palma Ratio of 1.15.