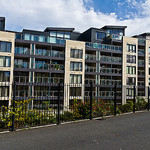 “There also seem (on the basis of such limited survey evidence as exists)1 to be many other households who could continue to pay their mortgages but, for the moment, are not doing so.”

Address by Governor Patrick Honohan to the Society of Actuaries in Ireland, 7 October 2013

Mortgage Arrears are a serious problem. At end December, 2013 14.3 % of mortgages for the covered banks (AIB, Bank of Ireland and PTSB) were in arrears . The arrears problem varies depending on the date the mortgage was taken out. For example, 21.5 per cent of mortgages taken out in 2007 were in arrears (the worst year). (Average balance €259,000). However, the problem is not confined to the period when house prices peaked. Surprisingly 8.3 per cent of existing mortgages taken out in 1997 are in arrears. (Average balance €39,000). Full data taken from the 2013 Forms 20 F of the three financial institutions are in Appendix 1.

The public has a strong interest in minimising mortgage default. Loans written off are deducted from bank capital. The cost of this is fully borne by the taxpayer in the case of AIB and PTSB which are effectively state-owned. In addition large write-offs could result in further recapitalisation of banks with the cost potentially falling on the taxpayer.

The public interest is also not served by forbearance on loans particularly in the buy-to-let sector. This artificially reduces the number of properties coming on the market.

The current interest cost of a €250,000 tracker mortgage is about €260 per month compared with a monthly rent of about €800 for a 1 bedroom property in Dublin 7 (the lowest of the Dublin postal districts)5

The current monthly repayments on a €250,000 mortgage over 25 years at a typical tracker rate of 1.25 % are €971. This compares with €1,498 in July 2010 – a reduction of 35 %. Monthly repayments of €971 would finance borrowings of just under €175,000 at a typical current standard variable rate of 4.5 % over 25 years. Clearly at current interest rates there is considerable equity in tracker mortgages which should be taken into account in any assessment of housing equity.

Increase in Arrears Cases in 2013

While most arrears cases date from the boom period, a number do not, and the balances outstanding in these are relatively modest suggesting that some at least are in substantial positive equity. The question also arises whether there is a difference in the approaches of different financial institutions to the mortgage arrears issue and whether or not this explains the significant differences in the growth of the arrears problem between institutions. For example, does what appears to be a more uncompromising approach by Bank of Ireland explain their relatively low increase in arrears cases. If not what is the reason for their markedly different experience.

There is a strong public interest in minimising mortgage default. The costs of writing off large amounts of mortgage debt could fall largely on taxpayers some of whom are trying to cope with their own debt.

While clearly some mortgage holders are in severe distress, the data suggest that some who could afford to do so have decided not to prioritise their mortgage debt. These cases may be concentrated among those with buy to let tracker mortgages, others on tracker mortgages and also in a small number of cases where the mortgage was taken out over 10 years ago.

More aggressive actions by financial institutions particularly in the buy-to let sector could in addition to reducing mortgage default could increase the supply of properties for sale through repossessions. This would be of benefit to first time buyers.

Figure 1 illustrates the increase in mortgage arrears on principal dwelling homes. In September 2009, accounts in arrears over 90 days were valued at €4.8bn, equivalent to 3.3% of total residential mortgage loan accounts. Arrears more than tripled to 12.9% (€18.8bn) in September 2013. December 2013 marked the first decrease in mortgage arrears since the start of the series to 12.6% (€18.2bn).

The total number of restructures in Dec 2013 was 84,053 cases. Of these, 46% were in arrears and 54% were not. The most common type of restructure is a reduced payment, followed by arrears capitalization and a term extension of payments.

1 “Examination of the Standard Financial Statement (SFS) returns of defaulting borrowers in Ireland has shown that, indeed, monthly amounts due on the original monthly schedule represent a remarkably small portion of current monthly income, for a relatively high fraction of borrowers”. (Address by Governor Patrick Honohan to the Society of Actuaries in Ireland, 7 October 2013)

2 Mortgages in arrears are those which are 90 days or more past due.

3 A tracker mortgage is a variable rate mortgage where the interest on the loan is linked to the European Central Bank rate by a fixed differential. Trackers began to be issued in Ireland around 2002 and virtually all mortgages issued in the period 2004 to 2007 were trackers.