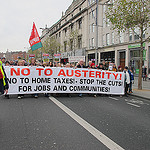 Exchequer figures, now available for the first seven months of 2014, are likely to inform decisions regarding the upcoming fiscal adjustment in Budget 2015. These decisions are constrained by mandated multi-annual deficit targets (expressed as a percentage of GDP) laid down under the Excessive Deficit Procedure. In addition to these deficit targets, the government provided an ex-ante valuation of the consolidation measures needed to achieve these targets via the Medium Term Fiscal Statements of 2011 and 2012. The Excessive Deficit Procedure set down the following multi-annual deficit targets:

Budget 2015 is significant as it is the last in a long line of Budgets for which the over-arching aim was to restore fiscal stability by reducing the general government deficit to 2.9% of GDP. The image below, taken from the NTMA Investor Presentation (May 2014), shows the extent of the consolidation already undertaken in each of the years 2008-2014, as well as the expected consolidation that will be made in Budget 2015, assuming the government implements €2b worth of expenditure cuts and tax increases.

The target consolidation of €2b in Budget 2015 appeared first in the Medium-Term Fiscal Statement of 2011, and was restated as recently as the Stability Programme Update in April 2014. However, several factors have since arisen that give credence to calls for a lessening of the planned austerity. First, a recent re-estimation of the size of the economy makes the government’s forecast of nominal GDP in 2015 look overly pessimistic. Second, Ireland has consistently over-performed relative to its previous fiscal targets and the exchequer returns for the first half of the year – considered in greater detail below – suggest that this trend will continue.

Additionally, there are psychological factors that are contributing to austerity fatigue amongst the public. Most significantly, the economic climate has been improving: GDP is estimated to be growing at a quarterly rate of 2.7% and an annual rate of 4.1%, and unemployment continues to fall, now standing at 11.6%. Additionally, as the graph from the NTMA shows, much of the heavy lifting with regards to budgetary adjustments has already been achieved.

The government must balance against rising austerity fatigue the goal of reducing the deficit to 2.9% of GDP in 2015. As a ratio between two numbers, both of which are uncertain, it is difficult to ascertain how much room to manoeuvre the government will have in the upcoming Budget while still complying with this target. However, we can extrapolate the impact on the debt ratio of both the recent adjustment GDP and the performance of the Exchequer Returns, while holding other factors constant, to get a simplistic notion of how big an adjustment will be needed this year.

The underlying exchequer deficit for the first seven months of the year has narrowed from €7.7b in 2013 to €5.4 in 2014. While an improvement had been anticipated, the outturn for the year so far has exceeded expectations by just under €1b. However, part of this over-performance is due to exceptional factors that may not be repeated again in 2015, such as higher-than-expected Central Bank income and increased dividends from state companies. Therefore it does not necessarily follow that Budget 2015 should introduce €1b less in austerity measures. Taking this into account, a better estimate of the fiscal over-performance would be around €600m.

The Central Statistics Office has recently released readjusted GDP figures for 2013 based on a new accounting framework. The most recent estimate under the old accounting framework valued 2013 GDP at €164b, whereas the new framework gives a value of €174b. This level change in the estimated value of GDP, equivalent to a growth of 6.5%, is significant as the nominal value of GDP is the denominator used in our mandated deficit and debt targets. This level adjustment will persist into the future, so that our fiscal targets will be comparatively easier to hit. The Department of Finance have stated that the higher value of GDP could reduce this year’s deficit from 4.8% to 4.5%.

While the new accounting framework will make it easier to reach our mandated deficit targets, it neither changes anything regarding our underlying fiscal health nor implies any increase in societal welfare. As such, it does not necessarily follow that the government should deviate from its planned fiscal adjustment on the basis of the accounting adjustment alone. Rather, the main impact of the GDP adjustment is to give the government greater freedom to adjust to the good news that is emerging regarding the state of the public finances and the economy.

The re-estimation of GDP is merely an artifice of changes that are being made to the National Accounts. More important for fiscal policy is the acceleration of growth since the latter half of last year, as revealed by the latest Quarterly National Accounts. In the SPU released in April, the Department of Finance pencilled in nominal growth of 2.6% for this year and 3.6% in 2015. However, more recent forecasts from the Central Bank are for a nominal growth of 3.1% this year and 4.5% next year. Economic growth provides a double boon in terms of improving our deficit-to-GDP ratio, both by increasing the denominator and, through reduced unemployment and higher tax revenues, decreases the numerator. The impact on the deficit of higher growth is beyond the scope of the simplistic calculations being pursued here, but the impact of higher growth on the nominal value of GDP would allow for a deficit around €100m larger while still meeting the target for 2015.

Combined, the smaller deficit and the higher growth rate of GDP should allow for an easing of the planned austerity measures from €2b to €1.3b. Allowing for the re-estimation of GDP would decrease this further, to about €1b, but as noted above, altering fiscal policy on the basis of a new way of counting GDP does not appear to be entirely sensible. Indeed this highlights a more general weakness in the use of fiscal targets that are reliant on GDP. The goal of fiscal policy should rather be to achieve a cyclically adjusted primary surplus, and whatever adjustment needed to secure this should be undertaken in Budget 2015.

It should be noted an adjustment of a €1.3b adjustment is based on conservative assumptions. For instance, it does not include and decrease in welfare spending or any increase in tax receipts that higher economic growth might bring about. Furthermore, it does not include any potential benefits that might arise from ongoing negotiations to replace some of the debt owed to the IMF with cheaper market-sourced debt. However, this estimate does not take into account any tax cuts, the possibility of which has been raised by the Minister for Finance.

In Detail: The Exchequer Returns

The Exchequer Returns continued to perform strongly over the second quarter and into July. At €31.1b, gross exchequer revenues1 are running €1.6b ahead of the same period in the previous year, while gross exchequer expenditure is €0.7b lower than last year. The cumulative exchequer deficit amounts to €5.4b and the average monthly deficit is €775m. Graph 1 below shows net cumulative exchequer receipts and expenditures for the first seven months of the years 2006-2014.

However, Tax Revenue and Voted Current Expenditure only tell part of the story. Graph 3 shows the difference between two broader categories of income and expenditure – total current receipts and total current expenditure. The major differing factor between the two diagrams is the inclusion of national debt interest payments. This highlights the significant burden of debt interest payments on the public finances.

Income Taxes: Income taxes (including the Universal Social Charge) have been performing strongly, mirroring the continuing recovery in the labour market, and are up €654m (7.6%) on the same period last year and are 0.6% ahead of profile. From the Analytical Presentation of the Exchequer Returns we can see that receipts from PRSI and the National Training Fund (NTF) are up €377m (9.0%) year-on-year and are 2.3% ahead of target.

Consumption Taxes: Much of the increased tax take has been in the form of increased consumption tax receipts. VAT receipts are €477m (7.2%) higher than the same period in 2013 and are 3.5% higher than profile. Excise Duties have also performed stronger than expected, with the outturn for the first seven months of the year running €146m (5.6%) above the same period last year and 5.0% above profile.

Corporation Tax: June was the first significant month of the year for Corporation Tax receipts, although, as the Department of Finance points out in their June Information Note, complications regarding the implementation of the Single Euro Payment Area have led to a timing issue whereby some receipts were registered in July. Now that the July receipts have been released, a clearer picture has emerged regarding the performance of Corporation Taxes in the first part of the year. At €2.1b, Corporation Taxes are down marginally on this time last year (-1.0%), but are €69m (3.4%) ahead of the Department of Finance profile.

Gross expenditure in the year to July amounted to €36.6b, down €744m (2.0%) on the same period last year, which is largely consistent with profile. However, while overall expenditure may be on target, this masks significant differences in the performance of expenditure headings.

Looking at current expenditure, which covers much of the day-to-day costs of running government services, well-publicised cost overruns in health spending, amounting to €243m, have wiped out gains made elsewhere. While the size of the cost overrun in the Department of Health is substantial, current health spending so far this year is €193m lower than the same period last year.

Current expenditure as a whole amounts to €30.7b, down 3.0% from this time last year and 0.8% higher than profile.

Overruns in current and capital expenditure are largely balanced by expenditure on National Debt interest that is €301m lower than profile.

1 There are a number of different definitions of exchequer revenue, expenditure and the balance between the two. For the most part, I will use gross revenue and expenditure excluding transactions with no general government impact from the Analytical Exchequer Statement, unless otherwise stated.