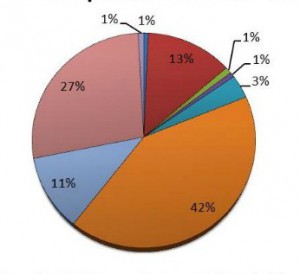 Since the beginning of the financial crisis Ireland has been running a significant General Government Deficit, but this has been greatly reduced through successive austerity budgets and, more recently, economic recovery. Ireland’s deficit is within the targets as outlined by the corrective arm of the Stability and Growth Pact and recent fiscal forecasts suggest that Ireland will be running a budget surplus by 2018. Gross Exchequer Revenue in 2013 was €56.1bn and Gross Exchequer Expenditure came to €67.6bn, leaving a deficit of €11.5bn. For 2014, it is expected that Gross Revenue will reach €57.8bn and that Gross Expenditure will fall to €65.7bn, resulting in a deficit of €7.9bn.

The final austerity measures as set out by Government in 2011 under the Medium-Term Fiscal Statement (MTFS) were to be implemented in Budget 2015. However the proposed retrenchment of €2bn was not seen. Instead, with economic growth and job creation allowing for greater flexibility than was previously envisaged, expenditure increases and an easing of the tax burden were the hallmark features of Budget 2015. Budget forecasts see 2015 Gross Revenue increasing to €59.2bn and Gross Expenditure remaining steady at €65.7bn.

Taxes 2013: Tax revenue for 2013 amounted to €37.8bn. Tax receipts for 2013 were up around €1.2bn from 2012 figures, representing an increase of 3.1%. Income tax was the biggest component of tax revenue in 2013, comprising close to 42% of total tax receipts. Value Added Tax (VAT) was the next largest contributor to the overall tax take. It is worth noting that receipts from Customs, Capital Taxes, Stamp Duty, and Levies were all down from 2012 figures. However a strong rise in Income Tax and the introduction of the Local Property Tax contributed to the 3.1% increase seen from the previous year.

Taxes 2014: 2014 has seen the Exchequer boast strong figures for tax receipts. Tax receipts for the first nine months of 2014 stand at €28.87bn. This is 2.5% ahead of profile and 7.4% above the take from this time last year. However Income and Corporation taxes were below target for September with last month’s overall take falling 6.3% below the Government target. These results are largely in line with the recent statement by the Irish Fiscal Advisory Council (IFAC). According to IFAC the improvement in receipts up to August can be attributed to one-off factors and as a result the trends seen for the first eight months of 2014 may not continue. Tax revenues for 2014 are now expected to reach €41bn which is 2.5% higher than forecasted.

Social Protection and Health were the largest areas of current expenditure in 2013, followed by Education. A fall in expenditure of over €500m can be seen in the Social Protection Group between 2012 and 2013, and current spending is expected to fall further in 2014 and 2015 as strong performance in the labour market reduces numbers on the live register.

The economic downturn that began in 2008 resulted in a huge loss in tax revenue and a sharp increase in current expenditure on Social Protection. This had an enormous impact on the health of Government finances and subsequently saw Ireland’s deficit grow. Ireland’s underlying deficit (excluding one-off costs relating to the bank bailout) reached -11.5% of GDP in 2009 but the gap has since been narrowed through a combination of strict fiscal policy measures and economic recovery. It is estimated that the deficit for 2015 will be inside the ceiling of -3% of GDP as set out under the Excessive Deficit Procedure.

The implementation of another austerity budget for next year was not deemed necessary by the government in order to satisfy our deficit requirements since the means by which Ireland can close this gap in public finances have changed due to the resurgent economy.

The above figure puts Irelands’ deficit in 2013 in context. Our deficit was among the highest in the Euro Area and despite the recent optimism concerning the health of public finances the deficit for 2014 is still set to reach around €7.9bn.

General Government Debt has grown steadily in recent years as a result of the underlying fiscal deficits as outlined above. The cost of servicing this debt in the year to date stands at €7.1bn which is up €226m on this time last year. However the debt/GDP ratio is projected to fall to just under 111% in 2014. Total Government Debt in 2013 amounted to just under €203bn, about five times higher than at the outset of the financial crisis.

Our borrowing requirements for 2014 are forecasted to be around €7.9bn. The strain on servicing this high level of debt will be eased as Ireland replaces €3bn worth of the €6.1bn in International Monetary Fund (IMF) loans with cheaper market-based debt. It is thought that the bond issued will have an interest rate of 1.7% versus the rate of 3.47% on the IMF loans.