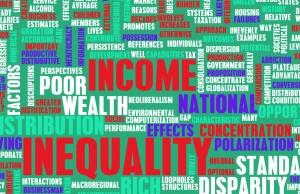 Ireland had achieved a gradual reduction in its Gini Coefficient from the 1990’s up until the end of 2009. In 2009 Ireland had a Gini Coefficient of 28.8, and was ranked 14 out 31 EU countries coming in below the EU average which at the time was 29.26. However in 2010 Ireland’s Gini figure rose dramatically to 31.6 which consequently placed Ireland 23rd in the rankings. The sharp rise in income inequality from 2009-2010 reversed all the progress that had been made and resulted in us being classed as the eighth most unequal EU country in terms of income distribution in 2010, coming in above the EU average which was 29.2.

In 2011 however Ireland moved up the rankings to twentieth place due to our Gini Coefficient falling to 31.11 . It is worth noting that during this same period from 2010 to 2011, the EU average Gini Coefficient increased as Ireland’s decreased.

The 2011 Gini Coefficients along with the rankings of each of the European Union countries are listed in Table 1 below.

• Rank 1 implies the most equal country, Rank 31 the most unequal.

The most current Interdecile figures available at present are from 2009.  These figures revealed Ireland had a P90/P10 ratio of 3.702 which implies the highest earners had disposable income 3.702 times more than those in the lowest income decile. The P90/P50 ratio for Ireland in the late 2000’s was 1.882 meaning the individuals in the highest income decile had 1.882 times the disposable income of their counterparts in the median decile. Both of the above ratios were below the OECD average; however the P50/P10 ratio of 2.182 was above the OECD average of 2.114.

The average quintile share ratio of the 27 EU countries in 2010 and 2011 was 5.0 and 5.1 respectively. Ireland was below the average in both years.

Those living in rural areas, single parents, individuals with low levels of education, children, and the unemployed have consistently had a high risk of poverty. In 2011 however, the groups which showed a significant increase in their at risk of poverty rate included:

Notes:
1 This was not a statistically significant change on the 2010 value.