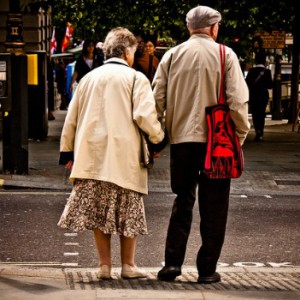 This note summarises our report into the data from The Irish Longitudinal Study on Ageing (TILDA)1 in relation to the incomes of the current population of retirees (aged over 65). It identifies the core determinants of these current incomes and suggests the policy implications that these results hold. To access the full report click here.

The Irish pension system can be divided into three pillars: State welfare pensions, occupational pensions and private pensions. The State provides flat-rate welfare pensions, the aim of which is to act as a safety net to keep retirees’ incomes from falling below a certain threshold. State pensions are the most important source of income among older people in Ireland and make up around two-thirds of gross income for those aged 65 and over with around 26% depending on state transfers as their sole source of income.

Occupational and private pensions make up the remaining two pillars. Occupational pensions are common in the public sector and in large private sector firms. Private pension schemes are voluntary and include Retirement Annuity Contracts (RACs), which are commonly used by the self-employed, and Personal Retirement Savings Accounts (PRSAs), which were introduced in 2002.

The levels and compositions of Irish retirees’ pension incomes

For low income individuals State welfare pensions play an important role. On average, for retirees whose income is less than €250 per week, State welfare pensions constitute more than 90 per cent of total income. Conversely for retirees with higher incomes, supplementary (mainly occupational) pensions are more important, with supplementary pensions making up over 80 per cent of total income for high income retirees whose income is more than €750 per week.

For both men and women higher levels of health and location in Dublin versus smaller towns or rural areas are also statistically significant determinants of supplementary pension coverage. Being married has a positive significant effect on the probability of having a supplementary pension for men, conversely for women being married has a negative effect although this is not statistically significant.

For men and women job tenure is significant in explaining supplementary pension coverage. It is likely that this is because the length of time with the same employer is a key determinant of pension coverage rather than the total number of years spent in work, because the latter can be non-continuous. Retirees can be expected to further prepare for their retirement the further they are in their working careers, hence length of job tenure in the last employment before retirement is likely to have a significant impact on pension saving behaviours as individuals prepare for retirement.

It may also be possible to attribute the significance of job tenure to reverse causality, individuals may not acquire a pension due to a long-term employment contract but rather may remain in the same job, long term, due to generous pension entitlements, especially in the later stages of their career.

The probability of an individual receiving income from a supplementary pension is much higher for those in public sector employment than private sector employment. On the whole, for men, tenure seems to matter more than years of experience with this relationship further strengthened when we control for firm size, occupation and public sector. Alternatively, for women, once firm size, occupation and public sector are controlled for, tenure ceases to feature as a determinant of supplementary pension coverage, however, years worked remains statistically significant. These differences between men and women may suggests that for both men and women very different processes are at work where determinants of supplementary pension coverage are considered. The larger importance of tenure in the case of men could be related to staff retention objectives on the part of employers and the choice by certain men to remain with employers who offered pension benefits, while the significance of experience for women points to the importance of the total number of years spent in work in determining supplementary pension coverage.

Supplementary pension coverage varies significantly among the current working population. For both men and women the most persistent and statistically significant findings are that those who own their own home, live in larger urban areas such as Dublin, work in non-manual positions in large firms or the public sector and have third level education are the most likely to have supplementary pension arrangements.

Further information on TILDA is at http://tilda.tcd.ie/