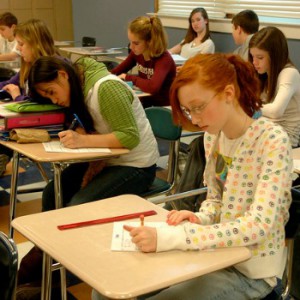 The OECD Universal Basic Skills report (2015) compares the maths and science abilities of 15-year-old students in seventy-six countries1.  This note examines Ireland’s performance relative to other high-income OECD countries2.  Ireland’s performance is above average but significantly behind the top performing countries. It also has a significant number of underperforming students and this issue needs to be addressed.

Ireland is one of thirty-one countries in the OECD high-income category (hereafter OECD 31). The average score of students in Ireland was 512, which is above the OECD 31 average of 502. Ireland ranks 11th highest based on its average score for mathematics and science. The five countries with the highest average scores are: Korea (546), Japan (542), Finland (532), Estonia (531) and Switzerland (523). In contrast, the five lowest average scores are found in Chile (434), Greece (460), Israel (468), the Slovak Republic (476) and Sweden (482).
Table 1 shows the average score and percentage share of students achieving less than 420 points3 in the thirty-one high-income OECD countries.

Ireland’s science performance is higher than its mathematics equivalent. Ireland ranks within the top ten in science at 9th place. With a score of 522 points, it is higher than the average of 505 for the OECD 31. Boys are performing marginally better at science than girls in Ireland (boys 523.9, girls 520.0). The three highest science scores are found in Japan (547), Finland (545) and Estonia (541).

While the performance of Irish students in PISA 2012 was better than in 2009, there remain various areas for improvement. Ireland’s average scores in maths and science were higher than the OECD averages; however, maths performance needs to be increased if we are to remain above the OECD 31 average. Furthermore, 15.1% – one in seven – students failed to attain the basic skills score in Ireland. Although below the OECD average, this figure represents the modern functional illiteracy of a significant cohort of 15-year-olds in Ireland.

1 The report combines PISA (Programme for International Student Assessment) (2012) and TIMSS (Trends in International Mathematics and Science Study) (2011). The PISA 2015 assessments took place in Ireland in March 2015 and the major domain was science. The results will be made available in December 2016
2  Hungary, Mexico and Turkey are in the upper-middle income category and therefore are excluded.
3  A score below 420 points represents a lack of basic skills. The OECD states that basic skills are “at least Level 1 skills (420 points) on the OECD PISA” scale. This level of skills corresponds to what might today be called “modern functional literacy” (OECD, 2015: 15).