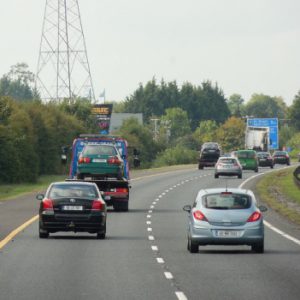 Under the polluter pays principle, tax rates on diesel and petrol fuels should be at a rate which is commensurate with the total environmental costs they incur. This suggests that the excise differential between the two fuels in favour of diesel should be unwound gradually.

The OECD has published its most recent environmental taxes data in ‘Taxing Energy Use 2018’. The effective tax rates for gasoline and diesel are shown in table 2 for the OECD 35 countries1. The countries are also ranked from highest to lowest respective of the price per tonne of carbon dioxide (EUR per t/CO2).

Ireland has an effective tax rate on gasoline (petrol) of €260.2 per tonne of CO2, which is 13% above the OECD 35 average (€230.3). Ireland has the sixteenth highest effective tax rate on petrol in the OECD. The three highest tax rates on gasoline are found in United Kingdom (€353.4), the Netherlands (€339.2) and Turkey (€337.6). Ireland’s tax on gasoline for road use is almost fourteen times higher than that of the United States which is ranked as the lowest in the OECD 35.

“At the current state of equipment and technology, diesel usually emits higher levels of harmful air pollutants per litre than gasoline, and also the carbon content of diesel per litre is higher. This suggests that on environmental grounds diesel should be taxed at rates which are at least as high as those of gasoline” (OECD, (2018: 39), ‘Taxing Energy Use 2018’).

Only two countries, the United States and Mexico, have higher effective tax rates on diesel relative to petrol. In 2015, the United Kingdom had the third lowest tax differential on petrol and diesel in the OECD at 18%, preceded by Switzerland (14%) and Iceland (5%).

Since 2008 – when taxes on vehicles were changed to reflect CO2 emissions – Irish consumers have increasingly sought to purchase diesel vehicles, which have lower taxation rates than petrol equivalents. The tax system has been effective in encouraging consumers to purchase new low-carbon cars. The average emissions of new cars purchased in 2017 was 112.7 g CO2 /km3 . This is a reduction of one-third relative to the level in 2007. However, diesel vehicles have higher emissions of air pollutants, fine particulate matter, and nitrogen oxides.

As of data up to 2016, Ireland continues to have the highest percentage (70%) of diesel vehicles in the new passenger car fleet in the EU4 . Vehicle licensing figures show that this share decreased to 65 per cent in 2017 among new private cars. Table 1 shows that the number of private licensed diesel cars remained unchanged in 2017 relative to 2016, while electric vehicles (EVs) increased by 80%, from 608 to 1,092.

The number of EVs has increased three-fold in three years. Hybrid licenses also increased to 7,392 – a significant increase of 78% on the previous year.

A comparison of EU excise tax rates in July 2017 showed that Ireland had the 7th highest rate of excise duty on diesel in the EU28 at €479.02 per 1,000 litres. Changes to the taxation of cars from 2008 onwards resulted in a dramatic shift in consumer purchases in favour of diesel cars over petrol. The rate of excise on petrol is €58.7c, including 4.6c carbon charge per litre, while the excise on a litre of diesel is €47.9c, including 5.3c carbon charge. This is a differential of 23 per cent. The last increase in excise on motor fuels was applied in Budget 2012. The UK has no excise differential on petrol and diesel. The excise differential in favour of diesel arguably does not capture the negative externalities associated with this fuel type.

The Tax Strategy Group (TSG) papers for Budget 2018 outlined a pathway towards the gradual equalisation of excise duty for petrol and diesel by 2022. Equalising the excise rates over a 5 year period would yield, on average, an additional €67.4m (VAT Exclusive) per annum by 2022. A straight-forward increase in diesel excise of 10 cent would yield €251 million. Cross-border price comparisons from September 2017 show that auto diesel was 12 cent cheaper to purchase in Ireland relative to Northern Ireland5 . Total taxes and duties on diesel were also 17 cent lower than in Northern Ireland. These cross border price dynamics need to be considered in the context of any changes to excise duties.

Under the polluter pays principle, tax rates on diesel and petrol fuels should be at a rate which is commensurate with the total environmental costs they incur. This suggests that the excise differential between the two fuels in favour of diesel should be unwound gradually.

2 As petrol is taxed at such a higher rate (more than 100 times) than diesel in New Zealand relative to the rest of the OECD, it is excluded from the calculation of this average.

5 The Euro exchange rate used on the survey date was 0.8870 sterling