Home / News and Archive / Does The Tax On Petrol And Diesel Need To Be Reviewed? 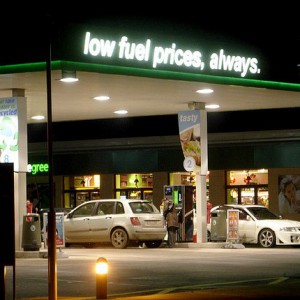 This note looks at the effective tax rates on petrol and diesel in Ireland relative to the OECD. A tax differential between the two fuels is examined. This note asks why petrol is taxed more than diesel, and if our taxation of these fuels for road usage needs to reviewed.

The effective tax rates for gasoline and diesel are shown in table 1 for the OECD 34 countries. The countries are also ranked from highest to lowest respective of the price per Gigajoule (GJ) of fuel for road use.

The difference in the effective tax rates for petrol and diesel reflect the energy and environmental policies in place in various countries.
Figure 1 below shows where the largest percentage differentials are found between rates of tax on gasoline and diesel in the OECD. As petrol in New Zealand is taxed more than one-hundred times the tax on diesel, it is not included in the figure below. New Zealand has the largest tax differential on these two fuels in the OECD, followed by Chile. Across the OECD, petrol is taxed on average 55% more than diesel1 . Ireland’s average tax rate on petrol is 35% more than diesel.

Figure 1 – Percentage difference between taxes on petrol and diesel

The United Kingdom has the third lowest tax differential on petrol and diesel in the OECD. Petrol is taxed at an average effective rate of €21.4, while diesel is taxed at €19.5 (10% differential).

In 2013, the transport sector was responsible for the largest share of energy-related CO2 emissions of any sector of the Irish economy (35% of CO2 emissions)2 . Since 2008 – when taxes on vehicles were changed to reflect the CO2 emissions they emit – Irish consumers have increasingly sought to purchase diesel vehicles, which have lower taxation rates than petrol equivalents. The result of this has been a fall in petrol consumption (1.2 Mtoe consumed in 2013) and a rise in diesel consumption (2.4 Mtoe consumed in 2013). In this respect, the tax system has been effective in encouraging consumers to purchase new low-carbon cars. The Green Paper on energy policy published by the Government in May 2014 notes that a:

“shift from petrol to diesel fuelled vehicles has played a significant role in energy efficiency gains and reduction in CO2 emissions. However, this could potentially have impacts for air quality, as diesel vehicles have higher emissions of air pollutants, fine particulate matter and nitrogen oxides” 3.

Diesel vehicles produce less CO2 emissions but they have higher pollution ratios with regard to particular air pollutants. According to the European Environment Agency (EEA), diesel vehicles maintain market share in the EU, constituting 53% of purchases. The European Commission is considering introducing a new car emissions testing process which would include on-road measurements by 2017. It has been argued that laboratory testing of vehicle emissions does not reflect actual emission levels in real-world conditions4 .
Ireland has one of the highest shares of diesel sales in the EU at 74%5 . The ratio of new petrol to diesel cars in 2007 in Ireland was 72% to 28%. In 2014, the ratio had almost exactly switched to 26% versus 74%. The average specific emissions for new passenger cars in Ireland between 2000 and 2014 are shown in figure 2 below. There has been a significant drop – more than a quarter – in average CO2 emissions of new Irish cars since 2008.

A number of questions arise:

1 As petrol is taxed at such a higher rate (more than 100 times) than diesel in New Zealand relative to the rest of the OECD, it is excluded from the calculation of this average.

4 The International Council of Clean Transportation has found that real-world NOx emissions for modern diesel cars are circa seven times higher than the limit required by the Euro 6 regulations.