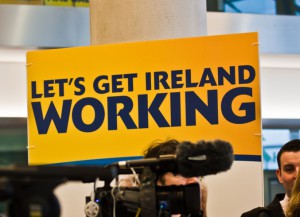 What does the data tell us about how we reconcile the need to provide adequate social protection with that of ensuring that disincentives to enter or rejoin the labour market are minimised? The EU has published very useful data on this question in a recent publication1 .

We are one of the worst performing EU Members states on this measure. Only Slovakia, Bulgaria and Lithuania are worse. So we have a problem in that about half of our low-skilled workers are unemployed.

At the 50 % level only Luxembourg, Netherlands , Denmark and Poland are worse.

The contribution of the tax system to these implicit marginal tax rates is very low by European standards (less than 3% in the case of the inactivity trap and about 10 % for the unemployment trap); the problem seems to be arising from the loss of benefits.

In Ireland about a quarter of the disincentive is due to the tax system compared with an average of about 40% in EU countries.

Based on this data the disincentives to work for young people with low skills are high and need to be reduced. While the issue is clear, it is less obvious what to do about it. One route, not likely to be acceptable is to reduce benefits. Another is to extend the earnings taper. This looks more attractive but it pushes the traps further up the earnings distribution and is more costly. Another option is to make an in-work benefit like Family Income Supplement more generous and increase the take-up rate. These issues are being considered by the Advisory Group on Tax and Social Welfare which is due to report on the question of in-work support by end June, 2014.