Home / News and Archive / Where Have The Extra Jobs Been Created? 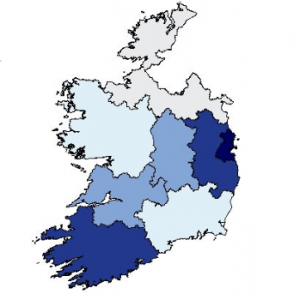 Employment in Ireland is now over 2 million. It is 4.9 per cent below the peak reached in Q3 2007 (2.17 million) and 13 per cent above the low point reached in Q1 2012 (1.8 million). The greatest recovery from the low point has been in the Midlands Region, with the lowest being in the West. Just one-third of the extra jobs created since the low point have been in Dublin.

This note examines the evidence from the Quarterly National Household Survey (QNHS) produced by the CSO.

The number of people employed in each of the eight regions from the lowest point in the downturn relative to the second quarter of 2017 (Q2) is shown in table 1.

Unemployment decreased by 46,300 (-25%) in the year to Q2 2017 bringing the total number of persons unemployed to 141,500. The unemployment rate has varied significantly in different regions in recent years.

1 Note that low point employment by region is taken from different quarters which affect the total.

2 Note that high point employment by region is taken from different quarters which affect the total.