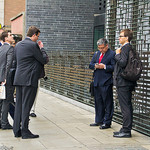 After being shut out of international lending markets in late 2010, the government was compelled to seek a €67.5 billion loan from the EU and the IMF, which was accompanied by a programme of fiscal consolidation. This brief note examines the government financing requirements over the programme period of 2011-2013.

Bilateral loans from Denmark, Sweden and the UK – €4.8 billion

In addition to the funding from official lenders, Ireland was able to raise a significant amount of its own funding, both in the form of new debt issuance and from the sale of state assets.

While exclusion from international markets prompted Ireland to seek official assistance, under the protection of the troika programme Ireland was able to raise market funding, including €18.1 billion in long-term bonds.

The single biggest use of government financing during this period was covering the gap between tax revenue and exchequer expenditure. Included in this figure is the €3.1 billion payment made under the promissory note arrangement in 2011. Over the programme period, the exchequer deficit was steadily decreased, as seen in the table below.

When the government found itself unable to borrow on international markets, not only was it prevented from issuing new debt to fund the deficit, but it was also unable to roll-over existing debt. Of the €35.4 billion, €16.7 billion was used to redeem long-term bonds

When the troika programme began, it was not yet known what the final bill for the bank bailout would be. The original assessment of Ireland’s financing needs placed a conservative estimate of €35 billion on the cost of supporting the banking system over the programme period, but this was later revised downwards to €18.1 billion following the completion of the PCAR bank stress tests. This figure should not be confused with the total amount spent on bailing out the banking system, amounting to €64.1 billion1, as the bulk of the gross costs incurred by the state pre-date the troika programme.

The NTMA maintains a large buffer of cash assets to ensure the ongoing liquidity of the exchequer. The size of the buffer fluctuated over the bailout period, initially decreasing as €7.5 billion of cash resources were committed to financing the troika programme, but the net increase in cash reserves over the period as a whole amounted to €10.6 billion.

The data on the finance requirements was sourced from page 36 of the European Commission’s Summer 2013 Review of the Economic Adjustment Programme for Ireland, while data on the initial estimate of the requirements comes from the Commission’s original Occasional Paper on the Economic Adjustment Programme. Further information on the use of NPRF funds comes from page 69 of the NTMA’s January Investor Presentation, which also provides a useful breakdown of the costs of the bank bailout. The figure for the financing of the cash reserves was calculated as a residual.

Notes:
1 See page 69 the NTMA’s January Investor Presentation for a full breakdown of the gross cost of the bank bailout