Home / News and Archive / Measuring The Size Of The Government 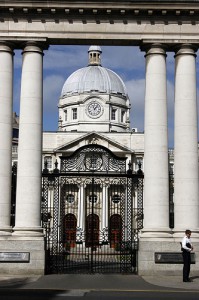 This note examines the size of government spending as a proportion of total economic activity.

After multiple austerity budgets and the likelihood of continuing fiscal restraint over the short to medium term, the magnitude of government spending comes under renewed scrutiny. Using the CSO’s National Income and Expenditure accounts, we can track the size of government expenditure as a percentage of GDP or GNP. In all the charts presented we use 3 year rolling averages (to get smoother plots), so the first observation is for 1972. Also, given the large differences that arise from using GDP or GNP as the denominator, both are presented. Unless otherwise stated, government expenditure excludes any banking related costs.

It is noteworthy that current level of spending relative to GNP is the highest in this period. It is also clear how the gap between GDP and GDP is wider than ever before, making the choice of national income measure more important. If one is willing to accept that GNP is better measure of economic activity, then government spending is at an all-time high relative to national income.

We can see that there are substantial fluctuations in the presence of government in the economy. The two periods where government spending increases relative to the economy (1980’s and now) are characterised by economic difficulty. This is to be expected for three reasons. First, difficult economic conditions lead to higher unemployment which results in larger expenditure on government transfers. Another reason for increased public expenditure in recessionary times is government debt interest. Due to the decrease in income tax and increase in government transfers associated with greater unemployment, the public finances deteriorate. This leads to both higher public debt which accrues interest and an increase in government bond yields due to increased default risk. Finally, even if government spending were to remain constant in nominal terms, contracting national output means that the size of the government sector relative to the economy will increase.

In an attempt to remove the effects of the business cycle, we look at government expenditure excluding government transfers and interest costs.

We can see that government expenditure excluding interest and transfer payments has been much more stable through time. This suggests that much of the variation in government spending as a percentage of national income is due to interest and transfer payments. The current level of expenditure is at its highest level in the 2008 – 2010 period using GNP. By contrast, using GDP yields a low level of government expenditure, again highlighting the great divergence in GDP and GNP in recent times.

Government Expenditure as a percentage of GDP/GNP

1 These figures include banking related costs (for all countries) and hence differ somewhat from those presented in the above tables.