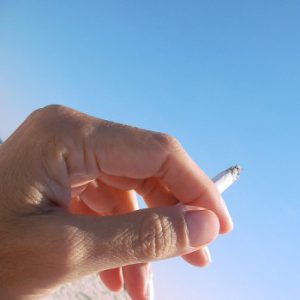 The Health in Ireland Key Trends 2016 report shows that cigarette consumption has declined over the past decade with only a slight increase in 2015. This follows the introduction of the smoking ban in 2004. In 2002, women smokers consumed an average of 14.1 cigarettes per day, while men smoked 16.7. Since then there has been a steady decline, with rates in the twelve months to March 2016 at approximately 10.3 cigarettes per day for women and 12.3 per day for men1 . Smoking is linked with many forms of cancer, cardiovascular and respiratory diseases, and as such is an avoidable health risk. Almost 6,000 people die annually from smoking-related illness.

Smoking prevalence is highest among those aged 25-34 years at 25.6%. The second highest prevalence is among those aged 18-24 years at 24.1%, however, it has fallen by 3.1pp on the 2015 figure. The smoking prevalence among the youngest age cohort (15-17 years) has increased each year to reach 10.1% in 2016. The Government aims to reduce the proportion of smokers in Ireland to 5% by 2025; which will require more than a 75% reduction in the numbers currently smoking.

The socio-economic background of smokers shows the range of smoking prevalence. Those most likely to smoke are ‘semi-skilled, unskilled, or unemployed’ (DE) as 23.7% of this group smoke. The second highest proportion of smokers is among those ‘skilled manual workers and those manual workers with responsibility for other people’ with one-in-five smokers (20.8%). Professionals and middle management (AB) are least likely to smoke (12.6%), after ‘farmers and farm managers’ (F) (10.4%). In the past year, the share of smokers has increased among the DE socio-economic group3 .

An economic assessment of the costs of smoking in Ireland estimated smoking-related health issues cost the healthcare system over €500m per annum. Excise increases on cigarettes have been applied to discourage consumers from smoking or starting to smoke. As of June 2016, Ireland had the second highest rates of duty on tobacco products in the EU.

Considering the twelve Budgets which were delivered between 2007 and 2016, excise increases on cigarettes were applied in ten Budgets. Budget 2017 increased excise on cigarettes by a further €0.50c, bringing the tax content of the average price of a packet of 20 cigarettes to 80.6%. The latest excise increase on tobacco products is expected to yield €65m in a full year.

2 Smoking prevalence is determined in the survey by asking the following question, “Do you smoke one or more cigarettes each week, whether packaged or roll-your-own?”