Home / News and Archive / The Minimum Wage in Ireland 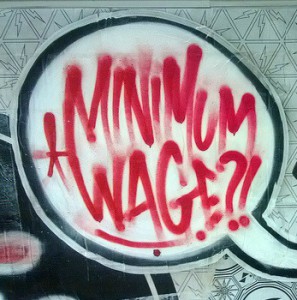 The Minimum Wage was introduced in Ireland by the National Minimum Wage Act 2000 . It states an hourly wage above and equal to which employers must pay employees. Since July 2011, the Minimum Wage guarantees an hourly wage of €8.65 to adult employees over the eighteen with at least two years previous employment experience. For teenagers under the age of eighteen, this wage guarantee is €6.06 per hour. This increases with a first year of employment over the age of eighteen to €6.92, and with two years of employment experience over this age to €7.79. Exceptions exist for both employees who are close relatives to the employer, and those undertaking structured training schemes, such as apprenticeships. In October 2007 it was estimated that 4.9% of employees in Ireland, approximately 83,700 people at the time, were earning the Minimum Wage. This report will discuss how the Minimum Wage has changed within Ireland since its introduction. It will then compare the Minimum Wage in Ireland with both within the European Union and across OECD nations.

It shows that the Minimum Wage in Ireland is the second highest in the European Union, only less than that of Luxembourg. However, this fails to account for differences in price levels between countries. For instance, if wages in one country were double that of another, but the prices of goods were double too, the average earner in each country would have the same standard of living. Hence the Minimum Wage under this measure would be deemed the same. Adjusting for Purchasing Power Parity takes into account the differences in the costs of goods and services across countries. Figure 3 shows this adjustment for the year 2012. It shows that when relative prices are taken into account, the value of the Minimum Wage falls by approximately 14% in Ireland. With this adjustment, Ireland has the fifth highest Minimum Wage in the European Union. This adjustment highlights that prices in the Netherlands, Belgium and France are less expensive than in Ireland.

Figure 4 outlines the ratio of median wages across a sample of 24 countries to the Minimum Wage for the year 2011.

The median wage is the income earned by the middle earner of all individuals. At this wage, half of those employed in a country earn more and half earn less. The greater the value of this ratio, the closer the Minimum Wage is to this average measure. This may act as an approximation for the distribution of income. Ireland has a ratio of approximately 0.48. The graph shows that of the sample of countries available, Ireland is averagely placed. This analysis may be extended over the time period of Minimum Wage legislation in Ireland. Figure 5 compares the Minimum to average ratio in Ireland to that of the United Kingdom, United States and an average of the sample of countries from the OECD.

It shows that, although higher than comparative economies since its introduction, this ratio has recently converged towards similar values to the United Kingdom and United States.