Home / News and Archive / The Cost Of Collecting Commercial Rates 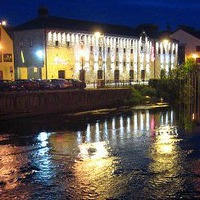 In conjunction with the interactive web application for localauthorityfinances.com, which allows the public to examine Local Authority (LA) income and expenditure for the year 2014, we have gathered the data relating to the collection of Commercial Rates by each LA.1 Rates, a form of property tax levied on the occupiers of all commercial and industrial property2 , are a significant source of income for Las, comprising on average 26.5% of total income in each LA. Due to data restrictions, most Town Councils are excluded from the dataset.

The amounts to be collected in rates are calculated by LAs as a residual after expenditure and other income sources have been estimated, assuming full compliance so that all rates are recovered (see the example of Laois below). The costs of rates that are either not collected or are refunded are represented as a line of expenditure under the Administration of Rates. In this note, we deduct refunds and irrecoverable rates from both Commercial Rates, giving a figure for net income from rates, and from the cost of administration of rates for each LA, giving a figure for the real cost of collecting rates3 . It should be noted that these calculations are based on estimated figures from LA budgets for 2014, and not on observed 2013 data. Again, this is due to the limitations of the dataset.

Calculation of Commercial Rates to be levied by Laois County Council, 2014

Efficiency of collection is calculated as the cost of administration (less refunds and irrecoverable rates) divided by net income from rates. Table 1 presents the efficiency of collection for all LAs included in the dataset; thirty one in total. Currently, Sligo stands as the most efficient LA in terms of collection of rates at 0.6%, followed by Galway City at 1.3% with Cork, Dublin City and Meath tied for third at 1.7%. Dún Laoghaire-Rathdown at 6.5% has the lowest efficiency of the thirty one Councils. It is followed by Monaghan County Council (5.4%) and Carlow County & Town Councils (5.3%).

The case of Dublin

Table 2: Rates, Administration Costs and Efficiency of Collection in the Four Dublin Councils

(Source: Figures sourced from the Adopted 2014 Budgets of the respective local authorities)

The inefficiency of rates collection more generally is highlighted by the comparison with the cost of administration by the Revenue Commissioners. In 2013, The Revenue collected €51.9b at a cost of €430m, an efficiency of collection of 0.83%.

Our recent experience of introducing property taxes may be instructive. The €100 Household Charge, introduced for 2012, was initially administered by the LAs and saw low rates of compliance – less than 70% by December of that year. The Local Property Tax (LPT) was introduced in July 2013 and collection was assigned to Revenue. The compliance rate for 2013 was 95% with €242 million collected in respect of the half-year charge. According to the latest information from the Revenue, the compliance rate for the LPT for 2014 so far is estimated to be 94%, with €367 million collected.

1 The figures include all City and County Councils with an estimated 94% of local authority spending currently accounted for. Outstanding data relating to some Borough and Town Councils are to be added shortly.