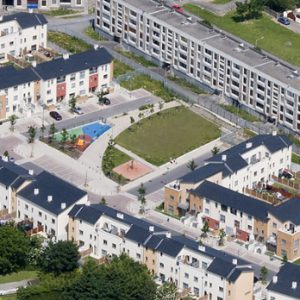 Local Authority rent arrears amount to €73 million, of which €37 million are in Dublin1.

The four Dublin Local Authorities have approximately 33 per cent of the Local Authority rented housing stock in the State. Between the four Dublin Councils, €138.6 million in LA housing rent was collected in 2016. This is an increase of 3.8pc or just over €5m relative to 2015. Revenue increased by 6pc in Fingal – the largest percentage increase in Dublin – to €19.9m. See table 1.

In 2017, €136.5 million in LA housing rent is projected for collection in Dublin. Dublin City Council is expected to collect the highest amount of rental income at €79m, followed by South Dublin (€23m), Fingal (€20m) and Dún Laoghaire Rathdown (€15m).
The average monthly rent of €2714 in Dublin City Council is approximately 15pc of average market rent in the city, and 23pc of the average rent nationwide5 .

There was over €36.6 million in aggregate local authority housing rent arrears in the four Dublin local authorities (hereafter Dublin) in 2016. On an annual basis, rent arrears have increased the most in Dún Laoghaire Rathdown County Council – rising by 15.9% or €0.6m to €4.06m. Rent arrears increased by €2.7m (7.8 per cent) in 2016 compared with 2015. See table 2.

Table 3 shows the number of tenancies in rent arrears in Dublin as of the end of Q2 2017.

It is Dublin City Council’s policy to apply retrospective debits to accounts where there has been an under-declaration of household income/occupants, and this is the primary reason accounts have large debit balances. Rent is assessed on household income and it is the responsibility of the tenant to keep the Council informed of any changes to income or family composition. The highest proportion of current arrears in Dublin City Council was incurred in 2009 following retrospective assessments of income/occupants which brought previously undeclared income to attention. An early intervention system now operates in the Council which warns tenants when their accounts are in arrears. Tenants receive a quarterly statement to inform them of their rental balance and any outstanding arrears.

Taking accounts of retrospective debits, the collection rate of accrued rent in the Dublin Councils was between 96 and 100 per cent in 2016. This highlights a strong performance in the collection of rent charges last year.

“to reduce overheads associated with revenue collection in this area and to substantially reduce arrears, as well as to streamline processes for local authority tenants and avoid accumulation of arrears” .

The Group also recommended that this should be a condition of new tenancies. Section 53 of the Housing (Miscellaneous Provisions) Act 2014 provides for the deduction of local authority rents and rent arrears from social welfare payments. However, this section of the Act has not been applied.

1  Relates to cases more than 12 weeks in arrears.
2 Local Authority Finances.com (See ‘Download Raw Data’)
3 These figures are sourced from the Department of Housing, Planning and Local Government.
4 Based on average weekly rent of €62.70 for Q2 2017 as provided by Dublin City Council.
5 Daft.ie rental report for Q2 2017,