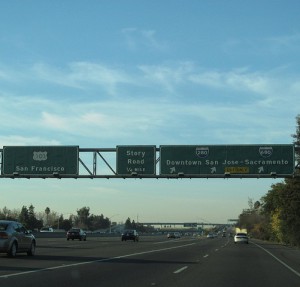 California continues to be a world leader in most of what it does and how it does it.  A recent visit yielded some good (the value of scale, volunteers, transparency), and not so good (labelling of highway exits, water policy and management) examples.

A highlight of my teenage years was listening to Alistair Cooke’s weekly letter from America (1946-2004) on BBC Radio 4. He covered American life, history and politics with originality, style and substance.  A recent visit to California as a bone marrow donor to my sister1 Síle reminded me of his letters, and emboldened me to provide a few reflections from California, and their relevance for Ireland, and how we comport and manage ourselves. This is part 1 of two. In the next, I address innovation and emigration

The Value of Scale in Specialised Medical Treatment

The hospital where the bone marrow transfer took place is the City of Hope, in Duarte, Southern  California. In 2011, they celebrated their 10,000th bone marrow transplant. They’ve seen it all, and they have procedures, skills and equipment to cover all eventualities. And the good news is that it is succeeding; my bone marrow has ‘engrafted totally’ so my stem cells have done the business.

In Ireland, the trend towards clustering of expertise in a smaller number of specialist units is to be encouraged.

Volunteers man help desks, including responding to requests about local shops and restaurants, and printing out Google maps. They take patients to their appointments, and generally act as a bridge between the outside world and the hospital. Most are former patients, so that their very presence is reassuring. They are all trained to be useful and to complement the professional staff.

This impulse is part of a wider culture in the US from which we could learn. For professions, volunteers can be a resource, not a threat.

Every charity that qualifies for tax exemption must file a form annually (Form 990) open to public inspection, detailing their income and expenditure, and the salaries (including base, bonus, other, retirement, non-tax income) of their most highly paid staff. The income of City of Hope hospital in 2010 amounted to $294 million (comprising $82 million from contributions and grants, $14 million from investment income, and $194 million from other revenue). The annual remuneration of their top 15 staff range from Dr. Michael Friedman ($1.43 million) to Tanya Mink ($0.21 million)

Driving on the California Interstate is not for the faint hearted, especially if you are unarmed with Satellite navigation, and suddenly find yourself having to cross 6 lanes to get to your exit. Exits are numbered, but you are not alerted to the upcoming exit number until you have arrived at it, at which time it is too late to take action. This is a peculiar deficiency in a culture which otherwise does signage well. Ireland’s National Roads Authority (NRA) numbering is a model of coherence and clarity in comparison.

While I was there, the governor (Jerry Brown) made a drought declaration: The State has had 9 major multiyear droughts over the past 100 years, but this is classified by the governor as the worst. “We are on track for having the worst drought in 500 years,” said B. Lynn Ingram, a professor of earth and planetary sciences at the University of California, Berkeley.

The old supply side solutions will not do2. In water wars of past years3, the battleground was a huge pot of water in Northern California which could be diverted to the South. But now there is no pot – reservoirs in Northern California are at ‘frighteningly low’ levels. A suggestion for a ‘major water delivery upgrade in the Sacramento-San Joaquin River Delta’ would not have made any difference this year – the state is so dry that there isn’t water to move even if the tunnels proposed existed.

And then it rained – good for crops and households, not so good for new hairstyles and fashion statements.  Ellen DeGeneres’ opening remark at the Oscars in Los Angeles this year captured a certain preoccupation: “It has been a tough couple of days for us here. It has been raining. We’re fine. Thank you for your prayers.”

But the rain was not sufficient to end the drought, and the policies needed to effect change – make it easy to trade and move water, so that it gets to where it’s most needed – seem unlikely to be implemented.

1 Early indications are that this has been very successful

2Two Irishmen played key roles in addressing the supply of water to San Francisco and Los Angeles. William Mulholland (1855-1935) is known for building the Los Angeles Water supply system (the Holland Tunnel is named for him) while Michael O’Shaughnessy (1864-1934) was responsible for the Hetch-Hetchy project (the O’Shaughnessy Reservoir is named for him) which supplied water and power to San Francisco.

3Chinatown is a brilliant film capturing the spirit of the water wars in Southern California in the 1920s; the patch covering an injury to Jack Nicholson’s nose which he received in challenging the system would be a nice symbol for those seeking to improve California’s broken system.