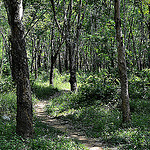 Irish fiscal policy is to a large extent shaped by EU legislation, and particularly by the Stability and Growth Pact. The following article compares improvements in the fiscal stance to the requirements of the Pact, and examines potential threats, which could derail Ireland from a path towards fiscal sustainability.

Two conditions form the foundation of the Stability and Growth Pact (SGP):

If a country is in breach of either the debt or deficit limits, it is subject to the corrective arm. The European Council will issue an Excessive Deficit Procedure (EDP), representing annual deficit or debt targets. Failure to comply with these targets could result in sanctions of 0.2% GDP. Alternatively, if a country is not under EDP, it is subject to the preventive arm, a cornerstone of which is the mid-term objective (MTO). The MTO is a country-specific benchmark measured in structural (i.e cyclically adjusted) terms, which every country should aim to achieve. Its purpose is to allow for a safety margin and budgetary manoeuvre in case of adverse unexpected events. In 2013 Ireland’s MTO was revised from a structural deficit of 0.5%GDP to a structural balance. The cause for this revision is Ireland’s exceptionally high debt levels. This tightening in the required structural balance – other things being equal- will require additional consolidation measures of €0.8bn.

Ireland has been subject to the Corrective Arm since 2009, and is scheduled to transition into the preventative arm in 2015, as the deficit is reduced to below 3%. Official estimates show the MTO of structural balance will be met in 2018.

As a result of the Fiscal Treaty, Ireland is required to comply with the three rules.

Ireland remains on track to meeting the targets as set out by the Stability and Growth Pact, even if marginally so as is the case in 2015. However, uncertainties include.