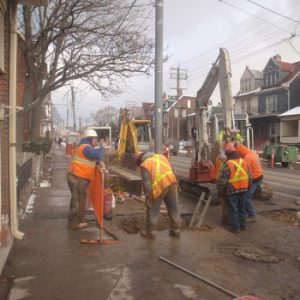 Every 4 years Eurostat carries out a Structure of Earnings Survey which provides detailed information on the structure and the distribution of earnings in the EU. Apprentices are excluded. The Survey covers enterprises with at least 10 employees in all economic activities except agriculture, forestry, fishing, public administration and defence, private households and extra-territorial organisations.

Given the close linkages between Ireland and the UK it is noteworthy that median earnings were 42 per cent higher than in the UK in PPS terms.

Disparities in earnings may be measured using deciles, and in particular the lowest and highest deciles, which correspond to the 10 per cent of employees earning the least (D1) and to the 10 per cent earning the most (D9). A high D9/D1 interdecile ratio indicates large disparities. The Irish ratio at 4.1 was the 6th highest in the EU after Poland, Romania, Cyprus, Portugal and Bulgaria. It is well known that the distribution of market (pre-tax) income in Ireland is one of the most unequal and that this is offset at least in part by our tax and expenditure system which is the most progressive in the EU.

At first glance this data is surprising. One possible explanation is the size of the multinational sector in Ireland which is much more significant than in other countries. Total employment in Ireland by overseas companies is 200,0003 out of just over 2 million jobs in the economy. The share of employment by multinationals in Ireland is the second highest in the EU (after Luxembourg)4 . The multinational sector in Ireland is a high pay, high productivity sector where the average earnings of employees are significantly higher than in the rest of the economy. Payroll cost of employees in the foreign sector is 50 per cent higher than that of Irish companies who were clients of the development agencies5 . The large number of highly paid employees in the multinational sector may go some way to explaining the high level of median earnings in Ireland and the relatively large gap in the pre-tax earnings of the highest and lowest paid deciles.

Note: Figures for Greece and Croatia are not available

1 Gross hourly earnings refer to the wages and salaries earned by full-time and part-time employees, per hour paid, in the reference month (generally October 2014) before any tax and social insurance contributions are deducted. Wages and salaries include any overtime pay, shift premiums, allowances, bonuses, commission etc.

2 The Purchasing Power Standard (PPS) is an artificial currency unit that eliminates price level differences between countries. Thus one PPS unit buys the same volume of goods and services in all countries.