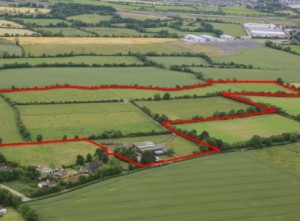 This note revisits the proposals in the Report of the Committee on the Price of Building land (1973) known as the Kenny Report. It also reviews the role of taxes and development contributions on betterment; which is the increase in the value of land arising from the provision of public infrastructure.

More than forty years have passed since the report by the committee on the price of building land, chaired by Justice John Kenny, was first published in 1973. The committee was established in 1971 with the following terms of reference.

The Kenny report highlighted the disproportionate rise in the price of building land. From 1963 to 1971 the average price of serviced land (‘undeveloped land which has the main services; water, sewerage and drainage close to it’) in County Dublin increased by 530 per cent compared to a rise of 64 per cent in the consumer price index. The committee recommended that local authorities be given the right to acquire undeveloped lands at existing use value plus 25 per cent by adopting Designated Area Schemes. This financial deal was deemed “a reasonable compromise between the rights of the community and those of the landowners” (Kenny, 1973: 40). The committee believed this would in turn stymie the disproportionate price rise in building land and thus end speculative land banking. Regulating the price of building land was considered by some as an infringement of private property rights which are protected under the Constitution. Nonetheless, as the increase in the value of building land was in many cases attributable to infrastructural works carried out by local authorities, the committee argued that the local community had a legitimate claim to all profit accruing to the land. This increase in value was referred to as ‘betterment’.

In 1982 the Commission on Taxation1 echoed calls for recommendations in the Kenny report to be implemented, particularly in relation to betterment. It recommended a high ‘development gains tax’ to capture betterment for the community. In principle this would be a 100 per cent tax on betterment gain. However, it was thought it would be difficult to distinguish development gains from other gains and therefore proposed a single rate of tax on any development gains, which would be higher than the normal rate of capital gains tax.

Compensation afforded to landowners, who were refused permission, set particularly onerous conditions or where land value was reduced on account of a planning decision, was very generous from the introduction of the 1963 Local Government (Planning and Development) Act. However, during the 1980s the need to address the ‘culture of compensation’ grew and the 1990 Planning Act instigated what Grist (2012)2 calls a “fundamental shift” in balance away from an individual landowner in favour of the planning authority. Indeed the Kenny report argued that the official arbitration system used to determine compensation rates for landowners “tends to inflate land prices” (Kenny, 1973: 13). Thus, it argued that if the free market system continued to be used to determine land prices, that the price of building land would continue its upward trajectory. This was undoubtedly the case during the Celtic Tiger period when prices increased substantially.

Instead of a betterment tax on profits, a Capital Gains Tax (CGT) has been charged on profits from the disposal of property assets. In recent years CGT has increased; since 2008 when the rate of tax on disposal of assets was 20 per cent to the current rate of 33 per cent since 6 December 2012. Furthermore, the 2009 NAMA Act charged gains on disposals of development land, to the extent to which gains are attributable to a relevant planning decision (rezoning or a decision to allow a material contravention of a development plan), at a windfall rate of 80 per cent. This charge has been abolished and profits from rezoned land are, from January 2015, to be taxed at a capital gains rate of 33 per cent.

Development contribution guidelines were updated in January 2013 and amended further in 2015. The revised guidelines5 aimed to reduce levies, which may have inhibited development and also increased house prices. However, Lyons (2014)6 argues that levies on development of up to €50,000 per unit amount to unnecessary regulatory costs, which require further reduction.
Development levies rose by a factor of 30 between 1995 and 2007. An inter-departmental committee on development contributions in April 20077 did not allude to concerns over the dependence on contributions to fund local authority infrastructural works. However, the committee did acknowledge at the time that schemes should be reviewed and a Circular letter to local authorities in May 2007 outlined issues they should examine. These were:

The review of schemes and revised guidance from Government took place as property prices fell and revenue from development levies was diminishing. The Local Government Audit Service reported in 20068 that accounting systems were “unsatisfactory” in relation to contributions, which made it difficult to establish an accurate sum due from developers. From 1 January 20079 , local authorities were obliged to account for contributions on an accruals basis as opposed to ‘cash’ equivalent used to that point. Indeed, Grist (2012) states that many developers were simply ignoring contribution conditions, because of inadequate monitoring at governance level. Figure 1 draws attention to the peak revenue from levies in 2007 which stood at €862m, to the drop in 2012 to €45m.

Contributions from developments not commenced are accounted for as long term debtors and short term debtors. Short term debtors (regarded as collectable at the end of 2012; deferred income) amounted to €360m with a corresponding provision for bad and doubtful debts of €232m, representing 64% of the debtors balance10 .

The housing strategy of local authorities, as a consequence of Part V of the 2000 Planning Act, allows for the transfer of land at existing use value rather than market value. Indeed, principles of the Kenny report can be found in amendments to the Planning Act. Nonetheless, there are “no provisions about betterment in the Irish planning code” and the general scheme of the Planning and Development Bill (Nos. 1 and 2) 2014 does not refer to betterment either (Grist, 2012: 116). However, the recently enacted Urban Regeneration and Housing Act 2015 contains other mechanisms which may contribute to balancing supply and demand for housing. These include: an annual vacant site levy11 , a reduction in the provision of social housing requirements from 20% to 10% under Part V12 , and reduced development contributions for planning permissions yet to be activated13 . Although the Kenny report was not implemented, it has undoubtedly contributed to the design of several schemes aimed at capturing the benefits from the provision of public infrastructure and social housing since its publication.

3 The Royal Institute of Chartered Surveyors proposed that development contributions should be in two parts. The first payable for connections to existing services and the second as a fund used to fund connection to additional services.

7 Government of Ireland (2007), Report of the Inter-Departmental Committee on Development Contributions – Available here

11 The vacant site levy will be applied at a rate of 3 per cent of the market value each year. The Commission on Taxation (2009) recommended such a recurrent tax on zoned lands left vacant.

12 The 2015 Act ends the provision under the Planning and Development (Amendment) Act 2002 which accepted cash payments as a substitute for social housing from developers.

13 A reduced period of planning permission, also termed as the ‘use it or lose it’ principle, was proposed in the Construction 2020 strategy. However, this mechanism was not included in the Urban Regeneration and Housing Act 2015.