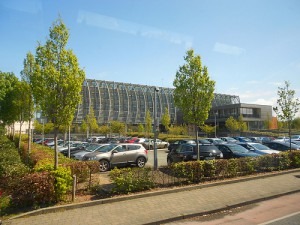 This note sets out the income and expenditure of the local government sector in Ireland.

Current spending of Local Authorities was €4.4 billion in 2012. Capital spending in 2011 was € 2.1 million. Total spending by local authorities is about 4.9 per cent of GNP.

The evolution of spending since 2008 is shown in Table 1:

Comparing these figures to Departmental spending by central government, spending by Local Authorities is surpassed only by spending in the Education, Health and Social Protection Groups.

The following are the main sources of current income available to local authorities;

Goods and services – Local authorities have powers to charge for services which they provide, for example, commercial water charges, housing rents, waste charges, parking charges, planning application fees. In most cases the charge or fee is set locally although certain charges or fees are fixed at national level.

Rates – Rates are levied annually by county, city, borough and certain town councils. Each of these authorities has exclusive rating jurisdiction within its own area. As a general rule, rates are levied on the occupiers of commercial property. Rates are assessed on the valuation of immoveable property such as buildings, factories, shops, railways, canals, mines, woods, rights of fishery and rights of easement over land. The valuation of such property for rating purposes is carried out by a central government agency, the Valuation Office, with a right of appeal to a Valuation Tribunal. Each year the level of the rate (known as the Annual Rate on Valuation or ARV) is determined by the elected council as part of the budgetary process. The annual rates bill for a commercial premise is calculated by applying this ARV to the valuation of the property concerned.

The Local Government Fund (LGF) is a special central fund which was established in 1999 under the Local Government Act 1998. It is financed by the full proceeds of motor tax and an Exchequer contribution. The Fund provides local authorities with the finance for general discretionary funding of their day-to-day activities and for non-national roads, and funding for certain local government initiatives. From 2014, the Minister for Finance will pay into the Local Government Fund an amount equivalent to the property tax paid during the year.

The Environment Fund is used primarily to support environmental initiatives, campaigns and programmes, many of which are organised at local or regional level under the auspices of local authorities. The proceeds of the plastic bag levy, which is paid by consumers and collected from retailers by the Revenue Commissioners, are paid into the Fund. Receipts from the landfill levy are also paid into the Fund. Disbursements from the Fund are used to assist projects on the basis of their capacity to protect or enhance the environment.
The breakdown of current income for 2011 is as follows:

The Revenue collection performance by local authorities has been highlighted in local government audit reports. The percentage of potential taxation and charges collected by city and county councils in 2011 was as follows: