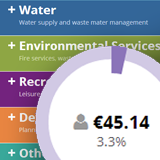 With the introduction of the Local Property Tax many people are for the first time being taxed directly for the funding of local services. We view this as a positive development from the perspective of strengthening local democracy, as there will now be a direct link between the level of services provided by local authorities and the price voters must pay. As a result, now tax-paying voters are understandably curious about what exactly these services are.

Localauthorityfinances.com is the fourth in our series of interactive web applications aimed at making public policy data easier to consume and understand by members of the general public. The goal of localauthorityfinances.com is to allow users explore the various activities funded by Local Authorities, and to equip them with the necessary information to make informed decisions. Users can explore their Council’s spending directly, compare their Council to a fictional “National Average”, or compare their Council to a selection of other Councils.

This has been our most ambitious project yet from a data-collection point of view. Budget data had to be sourced for each authority individually. In some cases, this was a simple exercise. In others, much effort had to be expended to source the necessary documents.

The data used refers to each Council’s estimates for 2014, using data from the Adopted Budget where possible, and using data from the County Manager’s Proposed Budget where not. Although the 2013 data is more easily available (it has already been collected and collated by the Department of the Environment, Community and Local Government, and can be found in excel form on their website) there have been a number of key changes to the funding of Local Authorities, so that 2013 figures would not provide an accurate reflection of the current situation.

The issue of Borough and Town Councils presented a complication: excluding them could present an inaccurate picture of the activities of local government within a county, but collecting the data for all 80 Borough and Town Councils would be a difficult task. To take the most extreme example, the combined budgets of Drogheda Borough Council and Dundalk Town Council (the two sub-councils of Louth County Council) made up 42% of total local authority spending in Louth in 2013. A decision was taken to include the most significant Borough and Town Councils, as well as those for which data was easily obtainable from the web. Upon launch, this included Drogheda Borough Council, Dundalk Town Council, Carlow Town Council and Castlebar Town Council. Budgets for these councils were merged with their parent County Councils’ budgets. Based on estimates using 2013 numbers, the dataset at launch contains 94% of total local authority spending.

Subsequently to the finalising of the dataset for the launch of the website, data was received from the following Borough and Town Councils, and will be added to the website shortly, raising the estimated coverage of the dataset to 96.5% of total local authority spending:

The most significant council not included is Sligo Borough Council, which makes up an estimated 17% of local authority spending in County Sligo. For those in a position to share it, 2014 Budget data for Towns and Boroughs not listed above would be greatly appreciated.

Local authorities divide expenditure into 8 Service Divisions, analogous to central government Departments, with each Division further divided into Sub-Services. For the sake of simplicity, we combined two of the Divisions (Agriculture, Education, Health and Welfare Division, which overseas expenditure on services as dissimilar as Dog Wardens and Third Level Grants, and Miscellaneous Services, which includes costs linked to local representatives and the administration of rates and motor taxes) into an “Other” category. Some Sub-Services were similarly combined (e.g. Road Maintenance is divided into maintenance of National Primary, National Secondary, Regional and Local Roads in the local authority budgets).

The creation of this data set would not have been possible without the co-operation of many individuals working in the local government sector. However, with voters now paying directly for the local services, the demand for easier access to information on council services is likely to grow. The abolition of Town and Borough Councils this year will significantly improve the accessibility of local government finance data. However, more can be done to improve the openness and transparency. At the very least, councils should release a copy of their budget on their website in a timely fashion following its ratification. Even better would be to provide budget tables in readable formats such as excel.

There is also a wide gulf in the quality of analysis contained within budget documents. Many councils provide the bear minimum by producing only the required statutory tables. The budget for Dublin City Council goes beyond the required statutory budget tables to provide additional analysis of the source and use of income for each division. Fingal County Council has made the most progress in terms of encouraging the use of data through the Fingal Open Data website (data.fingal.ie), which includes datasets and visualisations for all manner of local authority activities. Examples such as these show what can be done to promote greater transparency and understanding regarding local authority finance..