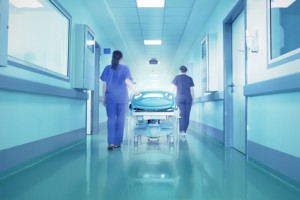 The average length of stay (ALOS) in hospitals is often used as an indicator of efficiency. Reducing the time spent in hospital reduces the cost per patient and allows more patients to be treated in a given period. Moreover, a shorter stay in hospital allows treatment to be shifted from expensive inpatient care to less expensive outpatient care. Thomas and Burke (2012) examine health policy in Ireland following austerity budgets in the wake of the economic and financial crisis and note that “efficiency gains have been a much vaunted policy tool”. The need to provide more services with less financial resources has led to the implementation of policies designed at promoting shorter hospital stays and increasing outpatient appointments.

The overall average length of stay is calculated by dividing total bed days by total inpatient discharges. In 2012 the overall ALOS in Irish hospitals was 5.7 days (versus a target of 5.6 days)1. The total number of inpatients for the year was 603,911 meaning 3.4 million hospital bed days were used. The potential benefits from reducing the average length of stay are significant. A reduction of one day in the overall ALOS could free up approximately 604,000 hospital bed-days allowing an additional 128,000 inpatients to be treated per year; a 21 percent increase in overall capacity.

“Length of stays for patients of medical specialties tend to be longer than other specialties and subsequent bed day usage of hospital bed stock tends to be greater. Therefore the monitoring of AvLOS in medical patients is important and the overall figure is useful as a summary measure at national level.”

Medical patient ALOS in 2012 was 7.2 days. Despite being an improvement on the previous year’s figure of 8.1 days, this falls short of the 5.8 day target.

We gauge the efficiency of Irish hospitals by comparing ALOS in Ireland to other countries in the OECD. However the raw data may not be comparable across countries due to heterogeneity along two dimensions; the age structure of the population and the mix/severity of conditions treated. Older patients typically require more medical care and their ALOS tends to be higher than younger patients. In Ireland the ALOS for those aged 35-44 is 4.5 days compared to 8.7 days for those aged 65-743 . In a UK study, Agboado et. al (2012) find the ALOS for people aged 80+ years is significantly longer than for those aged 40-59 years in relation to pulmonary disease related admissions. We carry out an age demographic adjustment on the raw data to normalize each country’s proportion of over 65’s to the OECD average and thus make the data more comparable4 . For example, the age adjusted data reflects Ireland’s favourable age profile as the sixth youngest country in the OECD. The results are presented in Table 1. After carrying out the age demographic adjustment Ireland has the tenth highest ALOS out of 34 OECD countries and the third highest in the EU (after Finland and the Slovak Republic).

Source: ALOS data from OECD Health Data 2012. Demographic data used for adjustment from OECD Health at a Glance 2011.
Notes: The most recent OECD figures refer to 2010 for which the ALOS in Ireland is 6.1 days. If we use the HSE’s updated ALOS figure for 2012 of 5.7 days we get an age-adjusted ALOS of 7.6 days. This moves Ireland from 10th to 12th highest in the table.

The OECD addresses the non-comparability of cross-country data by focusing on the ALOS for a particular disease. As pointed out in the OECD’s Health at a Glance Europe 2012 report,

“Focusing on average length of stay for specific diseases or conditions can remove some of the heterogeneity that may arise from the different mix and severity of conditions across countries.”

The OECD use myocardial infarction (more commonly known as heart attack) as the basis for comparing ALOS across countries. The results are shown in Table 2. The ALOS for heart attack patients in Ireland is the sixth highest out of 33 OECD countries at 8 days. The ALOS across countries ranges from 3.9 days (Denmark) to 10.6 days (Germany) with an OECD average of 6.8 days. There have been improvements in reducing the ALOS in Irish hospitals over the past number of years. However there appears to be scope for further progress. The current ALOS for medical inpatients of 7.2 days falls short of the targeted 5.8 days. The ALOS in Irish hospitals also appears to be quite large when compared to other countries. When we adjust for age demographics, overall length of stay is the tenth highest out of 34 OECD countries. The length of stay for heart attack patients is the sixth highest out of 33 OECD countries. Improvements along this metric are likely to yield considerable benefits in terms of lower average cost per patient and a significant increase in the availability of hospital bed-days.