Home / News and Archive / The Reinhart and Rogoff Debate: Implications for Ireland 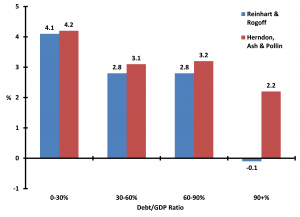 How much debt is too much? The answer to such a simple question would obviously be of great use to policy makers who struggle to make decisions under great uncertainty. But – as with many other questions – economists struggle to find a satisfying answer amid a bewildering array of factors that influence a country’s economic health at any given time and a paucity of reliable data. It was for this reason that a paper published entitled “Growth in a Time of Debt” by Carmen Reinhart and Kenneth Rogoff attracted so much attention. In that paper, the authors provided a simple narrative – higher rates of debt are associated with slower growth. In particular, debt/GDP ratio of over 90% is noted as a turning point, where after growth deteriorates significantly.

Finally, then, the simple question had a simple answer, and the analysis became very widely cited in policy circles, particularly among those in favour of deficit reduction.

However, as in the world of science, the robustness of an empirical result lies in its replicability. A team of researchers – Thomas Herndon, Michael Ash, and Robert Pollin – sought to test this using Reinhart & Rogoff’s data set and code . Through the process of trying to repeat the result of the 2010 paper, the authors discovered three factors that biased the analysis towards the conclusion that high debt limits growth: a coding error, the omission of some data, and an unconventional weighting system. I will not go in to the specifics of these factors (those interested in the nuts and bolts can check out the links below) only to say that Reinhart and Rogoff have acknowledged the coding error whilst pointing out that the data that was omitted was not available to them when they wrote their 2010 paper . The important point is that when these factors are accounted for, high debt is still associated with low growth, but debt/GDP ratio above 90% is no longer a significant turning point. A comparison of the two results is presented below.

Figure 1: Comparison of Results from the Original Paper and the Critique (Click to enlarge)

Beyond these data issues, a more fundamental critique of the Reinhart and Rogoff analysis has emerged. In their original paper, Reinhart and Rogoff merely find that episodes of high debt are correlated with episodes of low growth. This correlation survives, albeit weakened, in the Herndon, Ash and Pollin critique. But correlation does not imply causation, and it is equally as likely that low growth leads to high debt.

So what does this controversy mean for Ireland, both in terms of the austerity undertaken in the recent past and the future path of fiscal policy? First, it should be noted Ireland was already well down the path of fiscal austerity when the Reinhart and Rogoff analysis was originally published, and our debt to GDP was already destined to surpass the 90% limit by the end of 2010. It is unlikely then that “Growth in a Time of Debt” influenced or indeed was relevant for recent Irish fiscal policy when it was released.

Of greater importance is the question of where do we go from here. Ireland is facing into a high-debt future – our debt/GDP ratio is forecast to peak at around 120% before slowly falling. Should fiscal policy seek to reduce this debt to a more palatable level as quickly as possible, or should high levels of debt be tolerated? The 90% limit represented a convenient guide and a tantalising goal for policy which promised future growth in exchange for a tight fiscal policy in the present. It is now apparent that this is far from certain.

In reality, our future fiscal path will be more heavily influenced by our obligations under the Treaty on Stability, Coordination and Governance in the Economic and Monetary Union than by the empirical findings of macroeconomists. These obligations are aimed at reducing the risk posed by high public debt, rather than seeking to maximise economic growth. The Treaty lays down the pace of consolidation that we must adhere to: the gap between current debt/GDP ratio and the target debt/GDP ratio of 60% must be reduced by one twentieth of that gap in a year. Room to manoeuvre in any given year will be dependent on projections of nominal GDP, but at the very least we will have to run something close to a balanced budget over the coming years in order to comply with the Treaty.