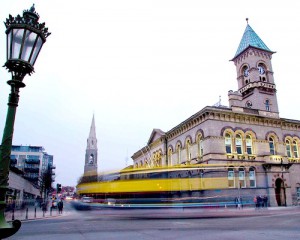 Government has indicated that the power of local authorities to vary the rate of local property tax 1(LPT) in their areas will operate from 2015 (after the 2014 local elections). This power provides an opportunity for candidates in the local elections to put their view on how this power should be used to the voters in the upcoming election campaign. Some may propose increasing the tax to fund additional services, vary the rate of charges or commercial rates while others may propose to reduce the tax.

It is not clear at this stage what proportion of the yield (if any) from LPT will be retained by individual local authorities but it may be up to 80 percent2 .

This note sets out the potential scope of this power by individual local authority area.

In summary, 15 per cent of the yield from LPT varies from 3.5 per cent in Dun Laoghaire Rathdown to 0.6 per cent in Leitrim and Longford. The absolute amounts range from €9.6 million in Dublin City to about €0.2 million in Longford and Leitrim.

The detailed numbers are in Table 13.

The scope for varying the rate of property tax varies significantly between local authority areas. The impact of the budget of Dun Laoghaire Rathdown would be over 5 times that of some local authorities. This suggests that the issue may be more relevant in the upcoming local elections for the local authorities in parts of Dublin and surrounding counties.

1 Section 20 of the Finance (Local Property Tax) Act, 2012 gives power to local authorities to vary the rate of local property tax in their areas by up to 15 per cent. (This power is subject to Regulations to be made by the Minister for Environment, Community and Local Government.)

2 On March 12, 2013, the Environment Minister, Mr Phil Hogan T.D., confirmed that Government accepted, in principle, a policy position that from 2014, 80pc of all Local Property Tax (LPT) receipts should be retained within the local authority areas where the properties are based and that these receipts should be used by those authorities in their local budgets. The remaining 20 per cent of the LPT collected nationally was to go to the Local Government Fund, which provides funding to local authorities on a needs and resources basis.

However, this position changed on 24 October 2013 when the Minister said in reply to a Parliamentary Question that

“The establishment of Irish Water presents local government with significant organisational and financial challenges in 2014 and, in this context, it has been necessary to defer defining a certain proportion of the proceeds of the Local Property Tax to be retained in each local authority until 2015. This approach allows maximum flexibility in allocating Local Property Tax in 2014 with the priority to support those local authorities with weaker funding bases.”.