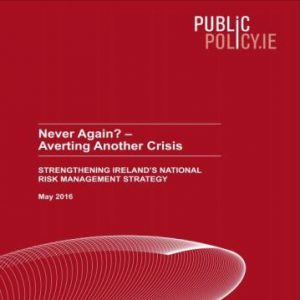 A critical feature of the period leading up to Ireland’s economic and financial crisis was a major underestimation of the risks associated with an increasingly unbalanced economy. The conclusions from the many official enquiries into the causes of Ireland’s unprecedented collapse all indicate that there had been a systemic failure to assess and manage key risks on the part of a wide range of public institutions.

From this perspective, an important task going forward is to put in place institutional arrangements and procedures to try to ensure that a crisis from whatever – perhaps currently unknown – source will not recur. The recent experience – and the fact that this was the second time in thirty years that Ireland has faced major economic and financial difficulties that were largely of its own making – emphasises the importance of strengthened economic policy making, especially given the current external environment of increased uncertainty and risk. Robust structures and processes that allow identification, analysis and mitigation of complex threats and potentially adverse developments are essential.

Considerable progress has already been made by government and associated agencies in putting in place important institutional improvements affecting key areas of economic and financial policy risk. To support this process, this report examines the practices of a number of other countries, several of which are small open economies with some characteristics similar to Ireland and which have also faced national risk management issues . While there is no universally applicable set of “best practices” in this area, considering initiatives taken elsewhere can enrich the debate on important issues.

The report emphasises the role of processes and institutional arrangements rather than the precise measures aimed at achieving particular outcomes. In this connection, two general points should be stressed: (i) structures are needed that delineate clearly the mandates, responsibilities and accountabilities of bodies engaged in various areas of risk management; and (ii) robust and well-defined processes of coordination and collaboration between different agencies are required so as to avoid the emergence of “silo mentalities”.

The report’s main conclusions regarding several key areas are summarised as follows (details are provided in the concluding part of each section):

In 2014 and 2015 the Government prepared and published a National Risk Assessment (NRA), the objective of which is “to identify strategic risks that may arise due to potential changes in the economic, financial, geo-political and social environments”.

Several countries are continuing to experiment as to how best to conduct their NRA exercises. Based partly on their experiences, several improvements/refinements aimed at strengthening Ireland’s current NRA process are suggested.

The analyses of fiscal risk, i.e., the assessment of the uncertainties associated with the outlook in public finances, have been expanded in Ireland’s recent budget documentation. In an important step forward, the April 2016 Stability Programme Update (SPU) contains a new risk matrix of 11 key external and domestic macroeconomic risks, assessed by likelihood of occurrence, impact and the main transmission channels involved. However, there is scope for further development.

IV ENHANCING THE ROLE OF PARLIAMENT

A feature of Ireland’s pre-crisis period was the failure to exercise effective parliamentary oversight on key economic and financial issues. The absence of sufficiently substantive input to the parliamentary budgetary process dilutes some of the potentially important “checks and balances” that can guard against the incurrence of excessive fiscal risk.

Against this background, the 2016 Programme for Government envisages the establishment of an independent Budget and Finance Office as a resource for the Oireachtas. The present report outlines in some detail alternative models for independent fiscal institutions that have been in place for some time in a number of countries (including Australia, the Netherlands and the United Kingdom).

It is recommended that before any decisions are taken as to precise institutional modalities, a small group should assess in-depth the relative merits of alternative possible approaches to meeting clearly defined objectives. The group would address issues such as the nature and extent of likely demands on the office’s resources by parliamentarians, the staffing (both size and expertise) requirements involved, the relationship between the office and government departments, the possible need for legislative underpinning and the financial costs.

If an alternative option, namely an expansion of the current remit of the Irish Fiscal Council (IFAC) to include a parliament-related costings function, were to be explored, the legislative, accountability and resource implications for IFAC would require careful consideration, as well as the need ensure that IFAC’s independence is not compromised.

Especially given the nature of Ireland’s crisis, ensuring appropriate macro prudential policies designed to safeguard the health of the banking system and overall financial stability are a critical part of national risk management. Generally speaking, the countries examined in the present report have put in place relatively more formal interactive consultative structures relating to the formulation of financial stability/macroprudential policy than is the case currently in Ireland. However, the wide variety of experiences suggests that an appropriate framework needs to be tailored to specific circumstances and may require adaptation over time.

In Ireland, unlike in several other countries responsibility for both macro and micro prudential policies is assigned to one unitary institution, the Central Bank of Ireland (CBI). As is generally the case elsewhere, given the possible presence of short term political pressures, it is essential that the independence of the CBI in fulfilling this role be maintained.

The current Principals Group, chaired by the Department of Finance and including representatives of the CBI and the National Treasury Management Agency (NTMA), can serve an important consultative purpose. However, in order for this arrangement to work effectively a number of changes are suggested, aimed at putting the Group on a more formal footing, along the lines of somewhat similar arrangements elsewhere. Specifically:

The identification of risks and the formulation of policies to adequately address them require a strong, well-functioning and professional civil service to perform these tasks to the required high standard. In the period leading up to the crisis, the quality and independence of civil servants – in particular the furnishing of expert and forthright advice on economic and financial matters and associated risks – was perceived to have been inadequate.

Against this background, the Government’s Civil Service Renewal Plan launched in 2014 addresses the key features required to raise civil service performance. An action oriented focus on accountability, as well as achieving consistency and cohesiveness across departments and agencies, will be essential to ensure effective implementation. The present report outlines key reform elements covering performance evaluation, human resource management that have been central to other countries’ civil service reform experiences. Most of these actions are in various stages of development and implementation under the Irish reform programme.

It will take some time for all the necessary changes to be put in place and for the effectiveness of the oversight framework adopted recently to be fully felt. However,

In order to try to avoid policy decisions that are based on inadequate or ill-informed assessments inconsistent with sound risk management, officials must ensure that their policy advice is provided to Ministers in a frank and open manner with respect to deliberations on all important substantive issues, for the written record. While broad guidelines do exist on paper as to the need to record interactions on key matters, it is far from clear that such guidelines are in fact being adhered to or that systematic monitoring with sanctions for noncompliance are in place. Several publicised events in Ireland in recent years suggest that inadequate record keeping with respect to key policy deliberations has been a serious issue.

At the same time, Freedom of Information (FoI) legislation, while highly welcome on grounds of accountability on the part of official bodies, needs to balance this laudable objective with the need to ensure that that the provision of frank and candid policy advice by officials for the record is not endangered. The majority of the countries surveyed in this report – including several which have a high reputation for openness – place considerable restrictions on access under FoI to policy advice. The report also details instances in a number of other countries where ensuring that adequate exemptions are in place has become a matter of lively public and political debate.

In the Irish case, taking into account differing (sometimes competing) considerations, a set of integrated measures is proposed.